ABTA included Iran in the 12 destinations to watch in our 2016 Travel Trends, so we were delighted when our intrepid traveller, Susan Parsons, decided to go on holiday there.

I chose to travel on an escorted tour (as I usually do) which I would strongly recommend. Iran is a new destination and unless you understand Farsi and can read signs, you might have a few problems... I felt safe the entire time I was there.

It’s a wonderful county with some amazing sites which are, however, some distance apart so don’t consider going there for less than two weeks. We drove, apart from a 7½ hour train journey from Tehran to Yazd, during which the carriage attendant kept us supplied with tea. An interesting interlude was the 20 minute stop for prayers somewhere in the middle of nowhere. The call to muezzin in the mosques was rarely heard, unlike in other Islamic countries, so you won't be woken in the early hours. 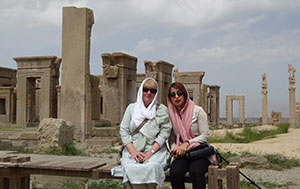 It was Nou Rouz (Iranian New Year) during my visit so the sites were crowded with lots of people. They were very friendly and like nothing better than taking selfies, preferably with blonde westerners – women with women and men with men. It took me 15 minutes to escape from that bench in Persepolis as they all lined up for pictures!

The sites are fabulous:

The food was excellent but it comes in large portions! Good salads, lamb and chicken kebabs, rice, some fish. Not so good for vegetarians as the vegetable dishes always had meat in them! A favourite was fesenjan - chicken in a pomegranate and walnut sauce. Iranians are big into puddings and love their ice-cream. Iran is dry, even in the hotels, but there are some very good fruit juices and sherbets. 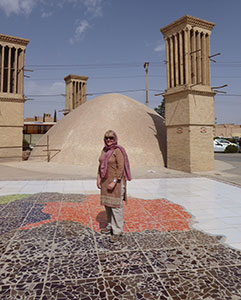 Iran is conservative with regard to dress:

Much of Iran is mountainous so there were big fluctuations between the day and night time temperatures. In the two weeks I visited, we went from -1° to 28°. It’s not humid.

Since I travelled, the Iranian embassy in London has recommenced its visa service. Visiting Iran does mean I will have to obtain a full US visa for a trip later this year, but it was worth it!