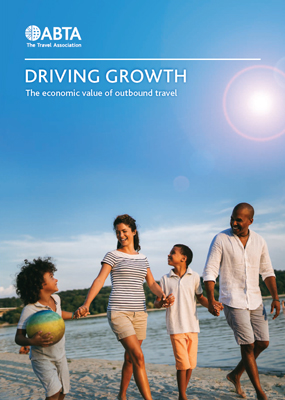 For the third time ABTA has commissioned research into the economic contribution of outbound travel, and once again it demonstrates how the outbound sector, alongside domestic and inbound tourism, is an integral part of the UK’s vibrant tourism mix.

Outbound travel’s economic contribution to the UK totals £37.1 billion in Gross Value Added (GVA), which amounts to around 1.8% of UK Gross Domestic Product (GDP). This includes a direct contribution of £15.9 billion (GVA), which is equivalent to around 1% of GDP. The sector directly sustains 221,000 UK jobs – a higher employment figure than provided by the entire wholesale and retail distribution of motor vehicles and motorcycles, and also more jobs than the UK’s iron and steel or electrical equipment manufacturing industries.

As we seek to define the UK’s economic future, it is imperative that policymakers acknowledge the UK tourism industry as a strategically important national asset, and recognise that each sector, inbound, outbound and domestic, is interconnected and interdependent, with shared infrastructure, shared products, and a shared consumer base.

A decade on from the financial crash, outbound travel has fully recovered and surpassed pre-recession levels, both in terms of numbers travelling and expenditure on trips. This is true in every nation and region of the UK. In addition, total expenditure within the UK by residents engaged in outbound travel reached £45.7 billion in 2017. This document should lay to rest arguments around a UK “tourism deficit”, as spending by UK travellers here, before departure,  exceeds the amount spent in every overseas holiday destination combined. This should dispel the myth that outbound travel is a negative for the UK economy.

Our industry possesses huge potential for growth. With the right policy and tax frameworks, travel and tourism can be a catalyst for further growth and job creation right across the UK. As we face an important national juncture, with policymakers set to use the coming years to establish an industrial strategy fit for the twenty- first century, and to determine our future trading relationships with partners in Europe and beyond, outbound travel, and the tourism sector as a whole, has an important role to play.

In order to download this document, you need to login to your account. If you don't already have an account with us then you can register to create one.

In order to download this document, you need to login to your account. If you don't already have an account with us then you can register to create one.