Top tips on organising a stag do

One of the plusses of being in a rugby club is that you make a lot of really good mates, one of the minuses is that you’re all around the same age and as you hit your late twenties and early thirties everybody starts marrying and inevitably that means a LOT of stag dos. For some reason, probably flattering, I’m often the one tasked with arranging the trips and after one particularly disastrous trip where the hotel was a tip even by male standards, I now put the whole thing in the hands of a specialist ABTA tour operator which arranges the transport, accommodation and activities – and VERY importantly gets the money off everyone,  and lets me concentrate on what I do best, making sure that a large group of beery blokes get on well for two or three action packed days.

So here are my top ‘soft’ tips to organising the ultimate good stag do.

Rule number 1. There are no rules. Joking, this isn’t fight club!

There are plenty of rules, but you must ensure the group feel this is not an ordinary stag trip, this is an adventure into the unknown.

If said loose cannons are not managed accordingly it can have serious consequences.

...develop a sense of togetherness and make sure that the stag is the centre of everything...

Rule number 3. Empower the group to expel their greatest assets

For instance, all members will think they could slot straight into Ocean’s 11. Unfortunately this isn’t the case, however each one will have a skill whether it’s being bi-lingual, incredibly rich, incredibly handsome, having dance moves picked up in East Croydon or being blessed with ‘chat’. Either way, it is important all the guys are given the opportunity to bring their A games to the show.

At some point, be prepared to tickle their tummies as they will soon roll over. There will be a few grumbles inevitably over the weekend, but big burly guys are often the most sensitive souls and you have to tickle their bellies. Figuratively speaking of course.

Assume all members will act like everything in their personal life is in complete control when in reality everything is but in control. This is classic man behaviour. This trip is about escapism, don’t kill the buzz. 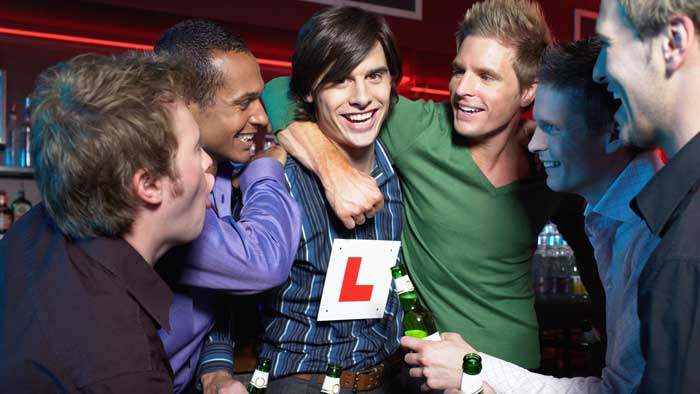 This is often decided upon by group size. If the group size is too big then you will have potential wolves who have not properly bonded. In such cases in the hotel corridor you may experience the old ‘off to bed‘ routine. If you have never witnessed it, it is quite hilarious. It is where two young bucks after a long night attempt to tell the other one to ‘get to bed’, whilst the one replies ‘you get to bed, it’s your bed time’. In this instance the two young males are trying to get an authority over the other. And so this ritual will ensue until either or normally both will fall asleep at the door so as not to be told it’s their bed time. Ridiculous.

But ultimately the stag has to be the centre of attention. Determined by the group, this can involve either being publically humiliated in a good humoured way or just sinking a couple beers with some friends outside a bar in the sun. But mainly you need to develop a sense of togetherness and make sure that the stag is the centre of everything.

Good luck and soak up the good times.

We’ve got more details on top destinations and activities for hen and stag dos, you can hear from a hen and if this has got you inspired you can find an ABTA Member and start booking.