Cape Verde and its hidden depths

Don’t judge an island by the airport transfer

Although the transfer from the airport to our hotel provoked thoughts of "why had we flown six hours to such a dry, treeless, windy and desolate place", thankfully from past experience I’ve learnt not to judge a holiday too quickly!

I was lifted by the memory of my first visit to Iceland and the 45 minute transfer from Keflavik to Reykjavik along a Tarmac ribbon road, laid upon the dull black volcanic lava. All gloomy thoughts on that occasion were dispelled by the majestic natural beauty of glaciers, geysers, waterfalls, puffins and whales that were soon to unfold.

Again when visiting Petra I endured a similar worrying experience. A three hour mini-bus drive from Amman to Petra wof dry, dusty and arid sandy terrain, reminded me very much of Sal in Cape Verde. Thankfully, in Petra the walk through the dark low valley to find the lost city was full of trepidation  but when all of a sudden the rose pink treasury appeared around the last bend filling my eyes, head and heart with immeasurable astonishment.

I hoped Cape Verde would be the same... 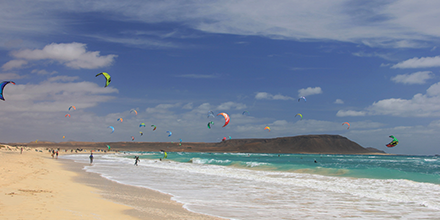 Admittedly, Cape Verde doesn't offer the history or natural beauty of Iceland or Petra but it has its share of hidden treasures that you have to make an effort to look for if you want to discover the real country. The Cape Verde archipelago is located in the Atlantic Ocean, approximately 570 kilometres off the coast of West Africa. We stayed on the island of Sal, one of the 10 islands that make up this country, which are represented by the 10 stars on its flag (even though one of the islands is inhospitable). We chose an all-inclusive holiday which always makes me even more determined to see what the country has to offer

The company offered a free walking tour to the nearby town of Santa Maria, given by one of its staff on their day off. We ended the tour by visiting the pier where the local fisherman land their catch and sell it to the restaurateurs, hoteliers and trades people. The catch consisted of grouper, marlin, barracuda, moray, yellow fin tuna, lemon shark and the most commonly found mackerel. There were two policemen stationed during the morning “market” – there to resolve the continual arguments over selling the fish, although they turn a blind eye to the lemon shark fins and jaws being illegally landed and dried out. Just a two minute walk down the beach after a long hot morning we found a great beach bar selling the best Caipirinia's on the island for only four euros.

We took a "Wading with Lemon Sharks" excursion that was sympathetic to the Sharks' eating habits - clearly evident by them feeding with their young only four metres from our immersed knees!. One lemon shark was three metres long which you could easily see because they were just below the waters surface. Our marine biologist guide informed us that lemons were one of 15 shark species that lived in the waters of the island. The cold waters of the Atlantic were bearable here because it was shallow..

This trip is backed up by a turtle discovery excursion held during the egg hatching season in June, which is also environmentally friendly. The organiser also runs a star gazing night time trip attended by astronomers, they must be overwhelmed with the abundance of stars on this island free of light pollution.

We took the almost obligatory catamaran sea trip which itself wouldn't have been that exciting if it hadn't been for the pair of humpback whales which was spotted 200 metres off the. Later we got the chance to swim in the cold Atlantic which some of the braver passengers enjoyed - or endured! I wasn’t convinced by the cries of "it's warm when you get in".

A seven euro taxi ride took us to the main kite surfing beach abundant with young surfer types learning from €240 for four one hour lessons. I didn't try it but as I watched them soaring, jumping, summersaulting and sometimes crashing into the foam I was with them in exhilaration - if not in body. It was a vibrant, colourful melee of more than 70 kites on a one metre long stretch of beach.

We took a minibus trip to discover the islands capital Palmeira and walked around the streets looking at the rather plain but delightful cupcake coloured houses, smiling children and hawkers selling a range of tacky souvenirs.

We then visited the salt pans of Pedra de Lume from where the island's name Sal comes from. We floated in salt water that was 25% denser than normal sea water, once again this is water that will be "warm once you get in"! Bizarrely this is set in an extinct volcano that was first exploited for its salt to export at the end of the 18th century. Without our guide, who had emigrated to join his forebears in Boston but had now returned to Cape Verde, this trip wouldn't have been half as interesting. 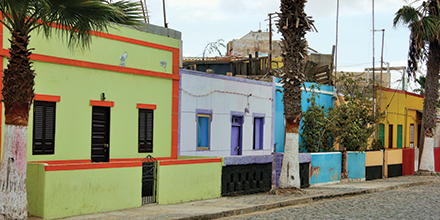 And finally the sand. The island was covered with sand due to the ever present winds, it was in our clothes, shoes and hair. The islands naturally soft golden beaches were in abundance some without a soul on them and even the remaining ones were sparsely populated. The sea may have been a bit rough in areas with waves one to one and a half metres high crashing onto the beach, but wave jumping the gentler ones was great fun. And the Atlantic was definitely warm once you were in...