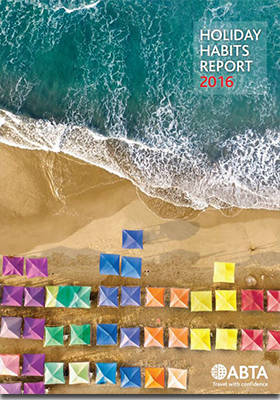 The past year has been both eventful and challenging from a travel industry perspective. The threat of terrorism around the world has become more widespread with many countries, including here in the UK, on a heightened state of security alert. We have also experienced an unusually eventful and turbulent time in UK politics, including a new cabinet and Prime Minister, following the result of the EU Referendum, which has had an immediate impact on the value of the pound.

Despite these signifcant events, the fndings from our research show that British holidaymakers continue to value their holidays, both at home and abroad, and indeed we have seen growth both in the number of Britons taking a holiday, and in the average number of holidays taken per person. Our research supports other market information that shows that people have continued to holiday abroad in the last 12 months, in spite of the very high profle terrorist threat.

They are choosing destinations that they perceive to be safer, with the result that some destinations have experienced notable falls in visitor numbers, while others have attracted signifcantly more visitors.

Looking ahead to 2017, our research suggests a continued positive outlook to spending on holidays next year, although I would add a note of caution given the uncertainties that still lie ahead for the UK economy around the Government’s Brexit negotiations.