The industry needs the UK Government and the Devolved Administrations to work with us to take steps to put travel on a firmer footing for the future. The Government’s removal of temporary travel restrictions implemented in response to Omicron was welcome, but it is clear these latest measures will have a lingering impact on consumer confidence that will soften demand and weaken the recovery over much of the winter period. This follows travel’s ‘lost summer’, despite the slow gathering of momentum following changes to international travel rules introduced in October 2021.

Write to your MP

It is important that MPs understand the impact that travel restrictions are having on your business, and the travel industry more broadly. Writing to them is a good way to communicate your concerns, and to ask them to support the industry in Parliament.

Not sure who your MP is? – Find out here.

Please also consider inviting the MP to visit your business, if you feel confident to do so, as it’s important that your MP hears your story. There is no better way to do that than face to face.

If you have any questions, please get in touch with ABTA’s Public Affairs team.

To help you write to your MP, read our response to the latest government announcement here, along with some of the asks we are calling for, here.

Additional Restrictions Grant funding – write to your council (England only)

Following the additional £102 million made available to Local Authorities by the Chancellor in December, official Government guidance for local authorities encourages councils to consider favourably applications from tour operators, travel agents, and other travel businesses. As such, in light of the restrictions imposed on international travel in response to the Omicron variant, ABTA is urging Members in England to contact their local authority to apply for this discretionary business funding. We have provided a template letter, which can be used to support your application. You can also see how much ARG funding your local authority received in the latest top up here. Not sure which council area you are in? Check that here. Contact ABTA’s Public Affairs team at publicaffairs@abta.co.uk if you need further information.

The Welsh government has announced new financial support for businesses in Wales impacted by Omicron. Under the latest package, retail, hospitality, leisure and tourism business who pay Non-Domestic Rates will be entitled to a payment of £2,000, £4,000 or £6,000 depending on their rateable value. The Welsh Government has decided to extend this support to include retail travel agents. In addition, certain impacted businesses (such as those who have experienced reduced turnover of 60% or more) may be able to apply for top up funding from the Economic Resilience Fund (ERF). Eligible businesses will be able to apply for grants of between £2,500 - £25,000, with grants dependent on their size and number of employees. Local Authorities will also administer a discretionary fund for business and sole traders who do not pay rates. The fund will provide £500 to sole trader and freelancers and £2,000 to employing businesses in impacted sectors. You can find more information and eligibility criteria here. Contact ABTA’s Public Affairs team at publicaffairs@abta.co.uk if you need further information.

On 25 March 2021, the Government announced plans to provide an additional business rates support package, worth £1.5 billion, to support businesses in England affected by COVID-19 but not eligible for existing support linked to business rates. The Department for Levelling Up, Housing and Communities has now published its guidance for local authorities to help them to administer the new COVID-19 Additional Relief Fund (CARF). ABTA would urge all ratepaying Members in England, who are not already eligible for the Extended Retail Discount (covering Retail, Hospitality and Leisure), to contact their local councils to seek more information about how to apply to the scheme. It will be for local authorities to determine the level of relief for individual hereditaments. You can find your local council details here.

Submission to the Transport Select Committee

The Save Future Travel Coalition made a joint submission to the Transport Select Committee’s inquiry into the sector’s recovery from the coronavirus pandemic. The Committee is currently examining the effects of the Government’s policy on international travel, including the system for international travel and barriers to the reopening of international travel. You find the full details of the inquiry here, and read the Coalition’s submission here. ABTA also made a supplementary submission on behalf of Members, which outlines a number of policy proposals to support the recovery of travel in both the short and long term, a copy of which you can read here.

How has COVID-19 affected travel agents – infographic for Members

If you are a travel agent writing to your MP, we have made available an infographic which explains the booking cycle for a travel agent which should help to demonstrate the impact of COVID-19 on your business. 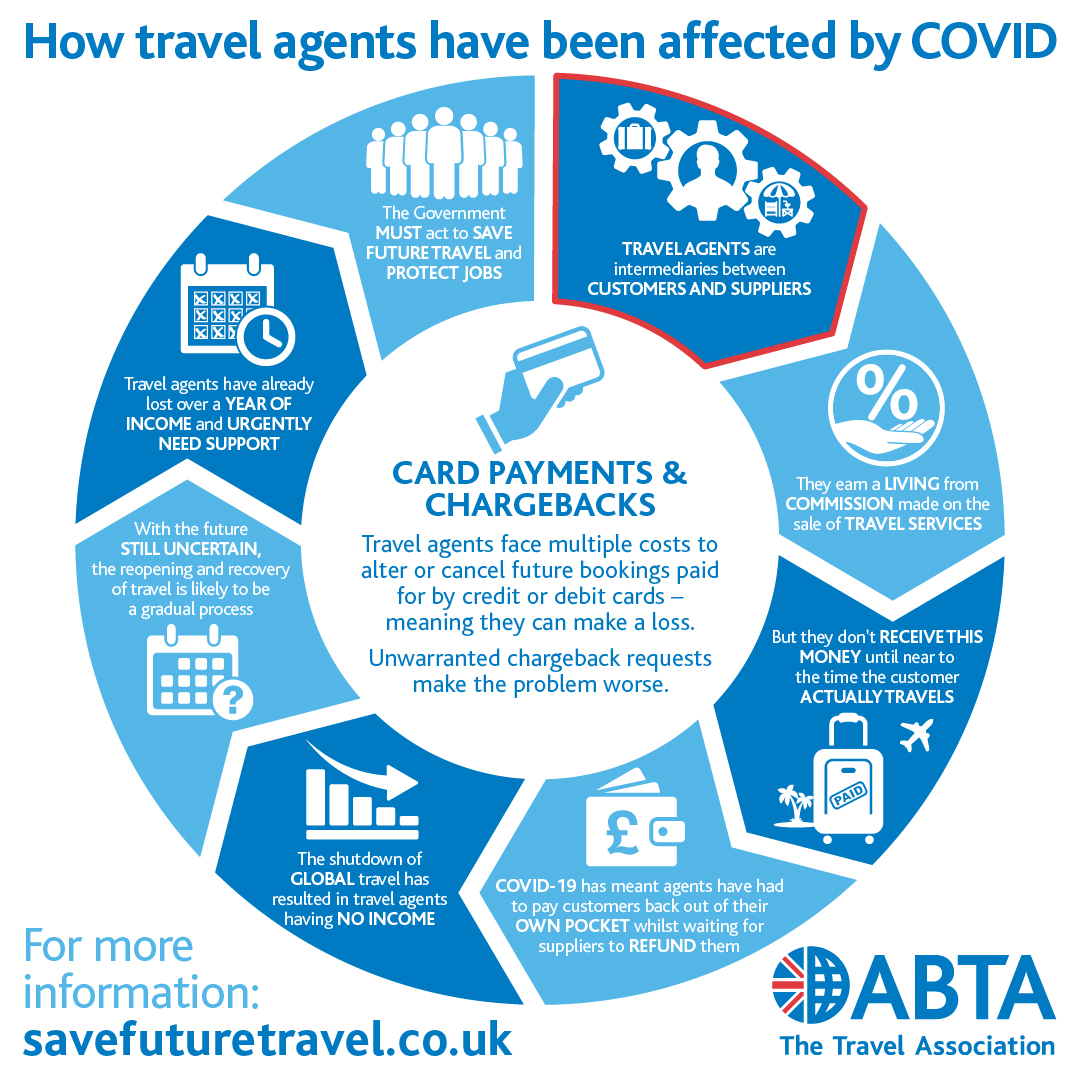 The Campaign to date

Save Future Travel began in response to the unprecedented global shutdown of travel as a result of the COVID-19 pandemic, which caused the Foreign and Commonwealth Office to issue advice against all but essential travel. This resulted in travel businesses – travel agents and tour operators – struggling to deal with an avalanche of refund requests, often while significantly under resourced.

It soon became clear that the existing Package Travel Regulations were not able to deal with this unforeseen global shutdown, and without urgent additional help, perfectly viable and normally successful UK travel businesses, employing tens of thousands of people, were and continue to be at risk of going bankrupt.

We called on the Government to take immediate action to avoid mass insolvencies of UK travel companies, prevent the loss of hundreds of thousands of UK jobs, and to ensure customers could receive refunds or book alternative travel arrangements as quickly as possible.

Among our lobbying activities, ABTA’s Chief Executive, Mark Tanzer, participated in an industry roundtable hosted by the Home Secretary and gave evidence at the House of Commons Transport Committee, addressing the issues facing the industry and highlighting the areas where the Government can support travel agents and tour operators. ABTA has held several meetings with Public Departments and written letters to our Prime Minister and Home Secretary, calling for urgent Government intervention.

ABTA has grown the Save Future Travel coalition to 15 leading travel bodies and campaign organisations which together represent the vast majority of outbound and inbound organised travel to the UK.

ABTA’s Public Affairs team works tirelessly with MPs from across the political spectrum to develop support for our sector, and ensure those in the corridors of power understand the challenges facing our industry.

Thanks to your support, as part of the first phase of Save Future Travel, over 25,500 emails were sent from travel businesses, staff and supporters to a total of 648 Members of Parliament, making sure our industry’s voice has been heard loud and clear in the wake of the COVID-19 pandemic.

Save Future Travel in the news

Our campaign has reached all national print and online publications, being featured hundreds of times, and on all the major broadcast stations, including the likes of BBC News, Sky News, BBC One, ITV, Channel 5 and Channel 4.

From the start of the crisis, we have appeared in the media calling for urgent Government intervention to Save Future Travel and a roadmap to recovery. ABTA is committed to continuing its lobbying efforts.

Read more about our travel advice and response to COVID-19. Guidance for ABTA Members is also available in the Member Zone.