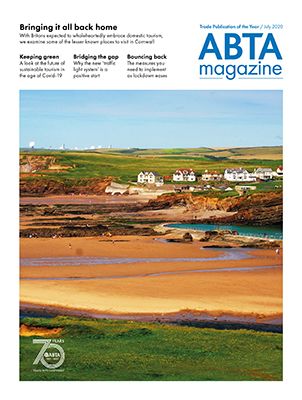 The latest issue of ABTA Magazine, created by Waterfront Publishing is out now.

Whisper it, but this may be the start of the long road to recovery. In June, the government announced a series of plans to ease lockdown, beginning with advance notice that, from early July, the hospitality sector will reopen. As social distancing rules were relaxed from two metres to one, pubs, restaurants, hotels and tourist attractions were told to prepare themselves to once again welcome customers, prompting hopes of a major boost in domestic tourism. One region that is likely to see a huge number of visitors is one which has traditionally been cautious to avoid overtourism, but, as Nathaniel Cramp examines, Cornwall has much more to offer than its best-known towns.

Last month, the likes of Spain and Portugal announced they were opening up to Britons but the Foreign Office continued to advise against all but essential travel to anywhere in the world, while the heavily criticised (and belatedly introduced) blanket 14-day quarantine measures remained in place. The announcement, then, of reciprocal travel arrangements – variously called ‘air bridges’, ‘air corridors’ or the ‘traffic light system’ – was welcomed wholeheartedly by the industry as a positive start, even before exact destinations were announced. However, there was frustration at early reports that suggested an “explosion” in bookings, given the various obstacles, including reduced capacity and restrictions to all but a handful of countries, that stand in the way of a prosperous travel industry. It is true that agents and operators have been seeing bookings grow, albeit from a standing start, and the appetite for travel is still strong. Since our last issue, in May, there is far more to be optimistic about, but difficult times and difficult decisions lie ahead. In this issue, we share resources from ABTA to help you through this period, while the Travel Trade Consultancy shares its advice. We hope you enjoy reading.