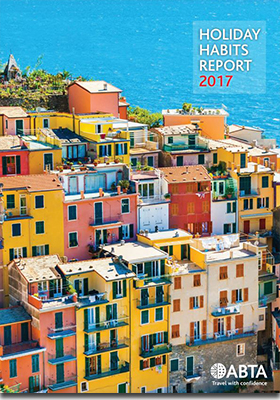 Last year I talked about the challenges of the threat of terrorism and the eventful and turbulent time in UK politics. Unfortunately the story of the past 12 months has been similar, although this time we have experienced even more terrible attacks on home soil, as well as a snap General Election and a continued assault on the value of the pound that was triggered following the EU referendum.

Despite these significant events, the findings from our research show a remarkably positive picture of holiday-taking by the British population. Britons have taken more holidays on average per person than at any time since 2011, a figure that is supported by wider industry research that shows a strong year for holidaying at home and abroad.

One of the industry trends we saw last year was people heading to destinations in the Western Mediterranean, in particular mainland Spain, the Balearics and Portugal, while the city break consolidated its position as the UK’s favourite type of holiday. Although 2017 has seen a similar picture, our research suggests that people are getting wise to the competition for popular destinations, as well as to the weaker pound, and are preparing to spend more on their holidays in 2018 to get the destination they want.

Of course, the great unknown is where the UK will be with Brexit negotiations as we head into 2018 and our research shows that people are confused about what the implications of Brexit are for their holidays. In spite of this confusion, nearly two-thirds of people intend to holiday in Europe in the next 12 months so it is clear that the British public still have a great desire to holiday in Europe, a clear message for politicians at home and abroad.